Molecular biology has long been the basis for the understanding of each individual step in the biology central dogma: DNA replication, DNA transcription into RNA, and RNA translation into proteins. These molecules are responsible for giving information to cells of each organism on how to survive and reproduce according to the environmental conditions at each exact moment. All this information is stored in the genetic material of cells and transferred to progeny as well.

Manipulation and investigation of this genetic material is done through various techniques including traditional molecular cloning (library construction), Polymerase Chain Reaction (PCR), qRT-PCR, and much more. These molecular biology techniques have various broad and useful applications in our scientific community including:

This comprehensive manual will guide you through the basic principles and techniques relevant to current molecular biology research, including protocols and troubleshooting solutions. If you would like a refresher course on the fundamental principles of molecular biology including DNA molecular structure, replication and transcription process mechanics, and more, please refer to the appendix at the end of this handbook.

We at Boster Biological Technology hope that this Molecular Biology ebook will be a useful reference to you at the lab bench. If you ever encounter questions that this guide does not answer, feel free to contact the Boster Support Team by email at [email protected]. Get better results with Boster!

Molecular cloning is one of the most fundamental techniques of molecular biology used to study protein function and structure. Generally, in this technique, DNA coding for a protein of interest is cloned using PCR and/or restriction enzymes into a plasmid. All engineered plasmids or expression vectors, have 3 main distinctive features:

In the wild, a certain plasmid can be introduced into prokaryotic cells by transformation via uptake of naked DNA, by conjugation via cell-cell contact or by transduction via viral vector. On the other hand, the plasmid can also be inserted artificially into prokaryotic and eukaryotic cells, such as fungi and plant cells or complex animal cells. Introducing DNA into cells can be achieved by physical or chemical means, and is called transformation. Some available transformation techniques include electroporation, microinjection, calcium phosphate transfection, and liposome transfection. A stable transformation may result, wherein the plasmid is integrated into the genome. Or if the plasmid remains independent of the genome, we have what is called a transient transfection. For transient transfections, since the DNA introduced is usually not integrated into the nuclear genome, the foreign DNA will be diluted through mitosis or degraded over time.

In a more stable transformation, the transfected gene can be inserted in the genome of the cell, which guarantees its replication in the cell’s progeny. Usually, a marker gene is co-transformed with the gene of interest, which gives the transformed cell some selectable advantage, such as antibiotic resistance. Some of the transformed cells will (by random chance) have integrated the foreign genetic material. When antibiotic is added to the cell culture, only those few cells with the marker gene integrated will be able to survive and proliferate, while other cells die. This is the process of screening. After applying this selective stress, over time, only the cells with a stable transfection survive and can be selected. Some examples of common agents for selecting stable transfection include: Ampicillin, Kanamycin, Zeocin, Puromycin, Blasticidin S, Hygromycin B, and G418, which is neutralized by the product of the neomycin resistance gene.

The protein of interest can now be expressed by the cell using the genetic information encoded in the inserted DNA. A variety of systems are readily available to help express this protein at high levels. This protein can then be tested for enzymatic activity under different situations, studied in the pharmaceutical industry, and/or the protein may be crystallized to study its tertiary structure. The possibilities are endless with molecular biology!

DNA library technology is a fundamental technique of current molecular biology, and the range of applications of these libraries vary depending on the source of the original DNA fragments. Molecular cloning techniques allow scientists to create and store a group of DNA fragments from different sources in a suitable microorganism and take advantage of the cell machinery to protect and replicate these exogenous DNA fragments. In molecular biology, this procedure is known as DNA library construction, and we can store different kinds of genetic material, including: cDNA (formed from reverse-transcribed RNA), genomic libraries formed from genomic DNA, allele mutants, mitochondrial DNA, randomized mutant libraries, and more…

Usually the DNA fragments intended to be stored are inserted into cloning vectors or plasmids, and the type of vector to be used will depend on the host microorganism that is used as the biological library. For example, if the microorganism selected is a bacteria like E. coli, it is expected for one to use a BAC vector (Bacterial Artificial Chromosome vector). Whereas if a yeast such as S. cerevisiae is selected to store DNA fragments, then a YAC vector (Yeast Artificial vector) is used. The host cell machinery will be responsible for maintaining and replicating the exogenous DNA fragments according to the information contained in the vectors used. The population of bacteria or yeast will be constructed such that each organism contains on average one construct (vector + insert). As the population grows in culture, the DNA molecules contained within them are "cloned" (copied and propagated).

Here we have an example of a BAC vector which is commonly used: 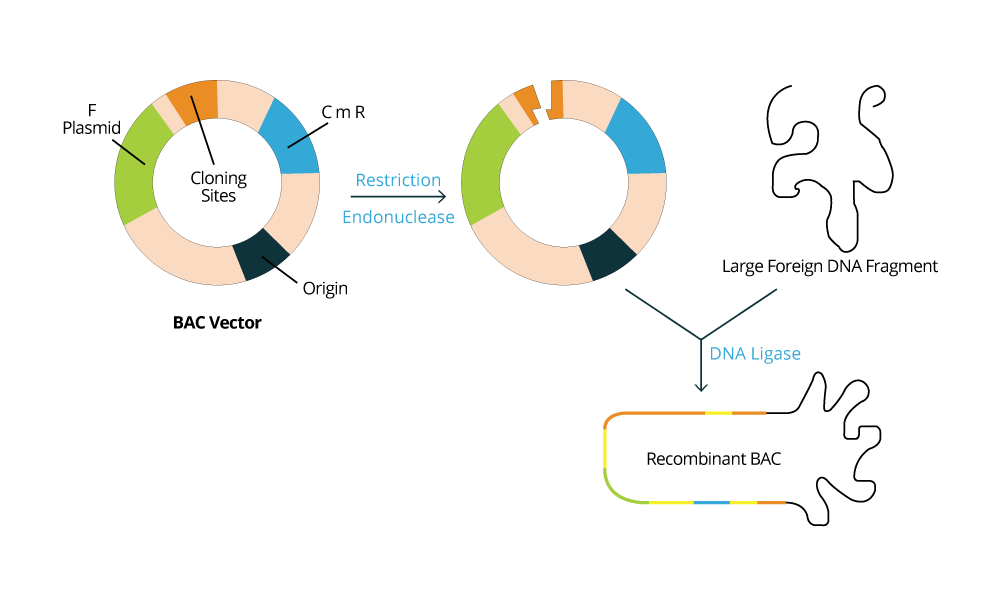 This section goes over the typical experimental setup for cDNA library construction and basic principles. The cDNA library uses mRNA as the source of information, so it only includes the organism’s expressed genes from a particular source. This mRNA can be extracted from the organism’s cells, a specific tissue, or even an entire organism. mRNA needs to be converted into cDNA by reverse transcriptase, in order to allow the host organism to perform the correct replication and transcription processes for mRNA. This means that it represents the genes that were being actively transcribed in that particular source under the exact conditions (physiological, environmental and developmental) that existed at the time the mRNA was extracted and purified. cDNA libraries are useful in reverse genetics, although they only represent less than 1% of the overall genome in a given organism.

The main advantage behind the choice of mRNA as the source for the DNA library preparation is to avoid junk DNA from genomic DNA and introns from eukaryotic genes. This ensures that only expressed genes from a specific cell or tissue are being stored. Although bacterial cells do not process introns, the use of mature mRNA (which is already spliced) allows the successful expression of the cDNA genes in bacterial host cells for further physiological tests.

Common applications for DNA libraries are:

cDNA libraries are used to express eukaryotic genes in prokaryotes since it does not include introns, and therefore, can be expressed in prokaryotic cells. cDNA libraries remove the large numbers of non-coding regions from the library, and it is also useful for subsequently isolating the gene that codes for that mRNA.

The diagram below illustrates the general procedure when preparing a cDNA library. 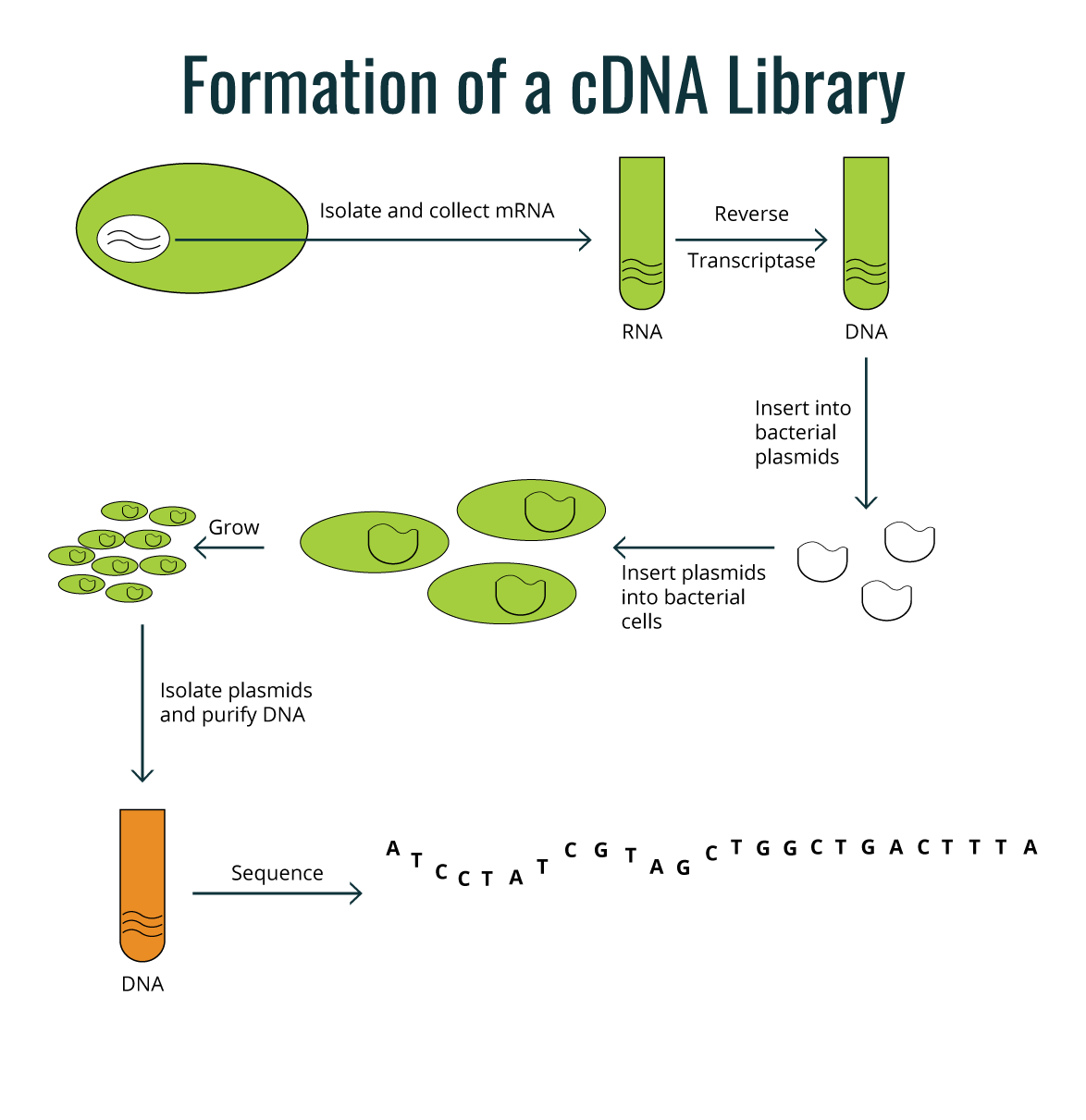 The tissue source of the genomic DNA is usually not important because each cell contains the same DNA (with few exceptions). To construct a genomic library of a specific organism, several variables should be taken into account, such as: host organism, type of vector, cell transcription and translation machinery, etc. However, the most fundamental criteria is to use a host prokaryotic organism if the genome to be collected is from a prokaryotic organism, and the same principle if the genome is extracted from a eukaryotic organism (which should be stored in eukaryotic host). This selection criteria will be critical to increase the chances of successful heterologous protein expression and allow further physiological tests. This procedure allows us to store the entire genome of a specific organism by inserting it in a specific vector with different fragment sizes depending on the restriction enzymes used. The vectors carrying small pieces of the genome are then transformed in host organism cells for further laboratory analysis.

Shown below are the steps for creating a genomic library from a large genome:

>>Did you know Boster has a convenient Miniprep Kit For Plasmid DNA Extraction And Purification?

As an example, prokaryotic organisms from soil are usually targeted for genomic library procedures, largely because they are known for their ability to be resistant to several antibiotics. In vitro culture of these organisms is rather difficult, which impairs physiological tests to identify genes involved in antibiotic resistance.

The typical flowchart protocol for DNA library construction (described in previous image) should be followed. First extract genome from soil organisms, digest the genome, insert into an appropriate vector, and transform in a prokaryotic organism (e.g. E. coli). Then, E. coli transformants should be plated in LB culture medium containing a specific antibiotic, like kanamycin. Only the E. coli transformants that carry genes from soil organisms along with antibiotic resistance marker will be able to grow. Positive colonies should be selected to sequence the vector and identify genes that play a role in antibiotic resistance.