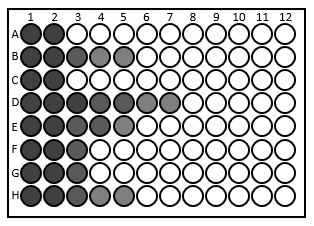 
The process of coating an ELISA plate relies on the passive binding activity of the solid phase, which immobilizes biomolecules on the well surface. Without appropriate blocking, the plate would bind the detection antibody alongside the antigen or detection antibody, resulting in high background signal and low sensitivity. Exposing the plate to a blocking buffer after coating causes the free binding sites on the well bottoms become saturated, removing the possibility of nonspecific binding and greatly improving the signal-to-noise ratio.

There are a variety of blocking buffers, not one of which is ideal for every combination of plate type, assay format, and detection system. Every blocking buffer represents a compromise between reducing background and maintaining specificity. Use this guide to help decide which type of blocking buffer is best suited for your specific application.

Non-ionic detergents, such as tween-20, provide a convenient an inexpensive blocking solution. However, detergents are not recommended as the sole blocking method: detergents are temporary blockers, since they can be stripped by washing with water or aqueous buffer. Detergents are primarily useful as a secondary blocking agent; when included in the wash buffer, detergents can actively block sites on the plate surface that become exposed as weakly associated proteins are washed away.

Protein blockers are a permanent blocking solution, and plates only need to be treated once for effective blocking. Protein blockers can also be added to the diluents used in subsequent steps to further reduce background signal. The most common blocking proteins include: bovine serum albumin (BSA), nonfat dry milk, and whole normal serum. Each has its own set of advantages and disadvantages: