Molecular biologists realized that mimicking the cell mechanisms of DNA replication, they would be able to replicate DNA sequences of interest. In 1983, Kary Mullis developed the revolutionary in vitro procedure to reach large concentration of specific DNA fragments, which is called Polymerase Chain Reaction or PCR. The PCR procedure allows scientists to copy and amplify specific regions of a DNA molecule (like genes) exponentially.

In brief, PCR allows a specifically targeted DNA sequence to be copied and/or modified in predetermined ways. This reaction has the potential to amplify one DNA molecule to become over 1 billion molecules in less than 2 hours. This powerful and versatile technique can be used to introduce restriction enzyme sites to ends of DNA molecules, or to mutate particular bases of DNA (a technique called site-directed mutagenesis). PCR is also useful for determining whether a particular DNA fragment is found in a cDNA library. Today, PCR has been further developed to include many variations, like reverse transcription PCR (RT-PCR) for amplification of RNA, and quantitative PCR which allows for quantitative measurement of DNA or RNA molecules.

For different molecular procedures, several copies of a specific DNA sequence are required. Quantitative PCR methods allow scientists to estimate the amount of a given sequence present in a sample. This technique is often applied to quantitatively determine levels of gene expression, and is an established tool that measures the accumulation of DNA product after each round of PCR amplification.

The first application of PCR was for analyzing the presence of genetic diseases mutations (genetic testing). A common application of PCR is the study of patterns of gene expression. Tissues and individual cells can be analyzed at different stages to see which genes are activated or inactivated, and quantitative PCR can be utilized to quantitate the actual levels of expression.

Because PCR amplifies the regions of DNA that it targets, it can be used to analyze extremely small amounts of sample available. This is important for many different applications. For example, PCR may be used in phylogenetic analysis of ancient DNA such as that found in bones of human ancestors or frozen mammoth tissues. In forensic analysis, often there is only a trace amount of DNA available as evidence and PCR amplification solves this problem. Viral DNA can also be detected by PCR, but the primers used must be specific to the targeted sequences in the DNA of the virus. Furthermore, the high sensitivity of PCR permits virus detection soon after infection and sometimes even before disease onset. Such early detection may give physicians a significant lead time in treatment. PCR is also a critical tool to diagnose genetically rare diseases, such as Huntington disease.

PCR utilizes the DNA polymerase enzyme, which naturally catalyzes the synthesis of DNA sequences. All DNA polymerases synthesize DNA in the 5’ to 3’ direction. In order to start the synthesis process, it is necessary to have a pair of chemically synthesized oligonucleotide primers made of DNA (as the primers are synthesized by cells). These two primers are designed to flank the DNA fragment, which will be amplified.

The image below is an example of a forward primer and reverse primer, which are designed before PCR amplification is performed for the double stranded DNA sample template shown in the middle.

The following diagram illustrates the reagents needed for a standard PCR experiment, and the general steps of a PCR Cycle.

>>Did you know Boster has a convenient PCR Master Mix? Save your time and reduce contamination with our pre-mixed formulation! 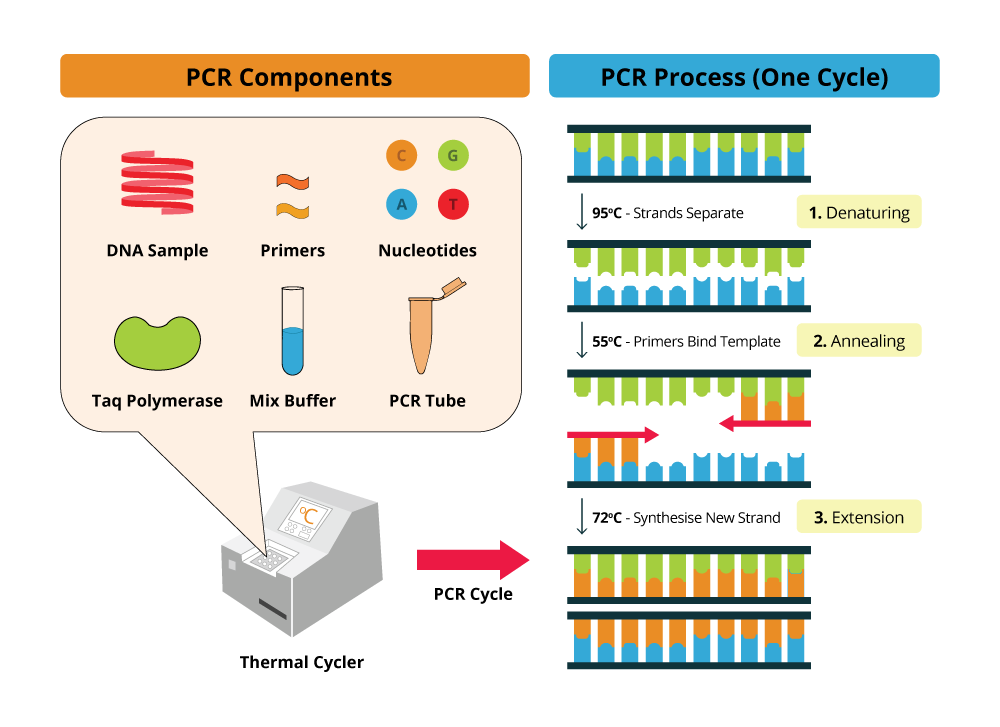 Upon high temperatures (around 95ºC) the DNA template molecule will denature and the two strands will move apart, breaking the hydrogen bonds that link the double helix DNA strands. Then, using lower temperatures, also called annealing temperatures (55ºC - 65ºC) will trigger primer annealing with the DNA template at the complementary sequences. At optimal temperature, extension occurs and DNA polymerase will then synthesize DNA, starting in the primer annealing region. After a certain period of time, dependent on DNA polymerase synthesis rate, the PCR solution is again heated at denaturing temperatures to repeat the previous cycle for several times.

Since, high temperatures are required to denature the dsDNA molecule; the DNA polymerase in solution has to be able to maintain its catalytic activity after such extreme temperatures. Thus, most of the DNA polymerases used in PCR protocols are extracted and purified from extremophilic microorganisms accustomed to living in high temperature environments. As examples, there are the Taq-polymerase from Thermophilus aquaticus or the Pfu-polymerase which is from Pyrococcus furiosus. These can handle temperatures of 95ºC and 100ºC, respectively. There are dozens of DNA polymerase used in PCR protocols, each one with its own specificity. Some of them have proofreading activity, others exonuclease activity, and more…

At the end of each PCR cycle, the PCR product or amplicon will increase exponentially because the newly synthesized DNA sequences can be used as templates (in addition to the original DNA template). Usually, 20 to 30 standard PCR cycles are enough to promote an increment of 106  to 109 of the DNA fragments flanked by the two primers. The following image depicts how the PCR amplification process works to exponentially create copies of the DNA sample template: 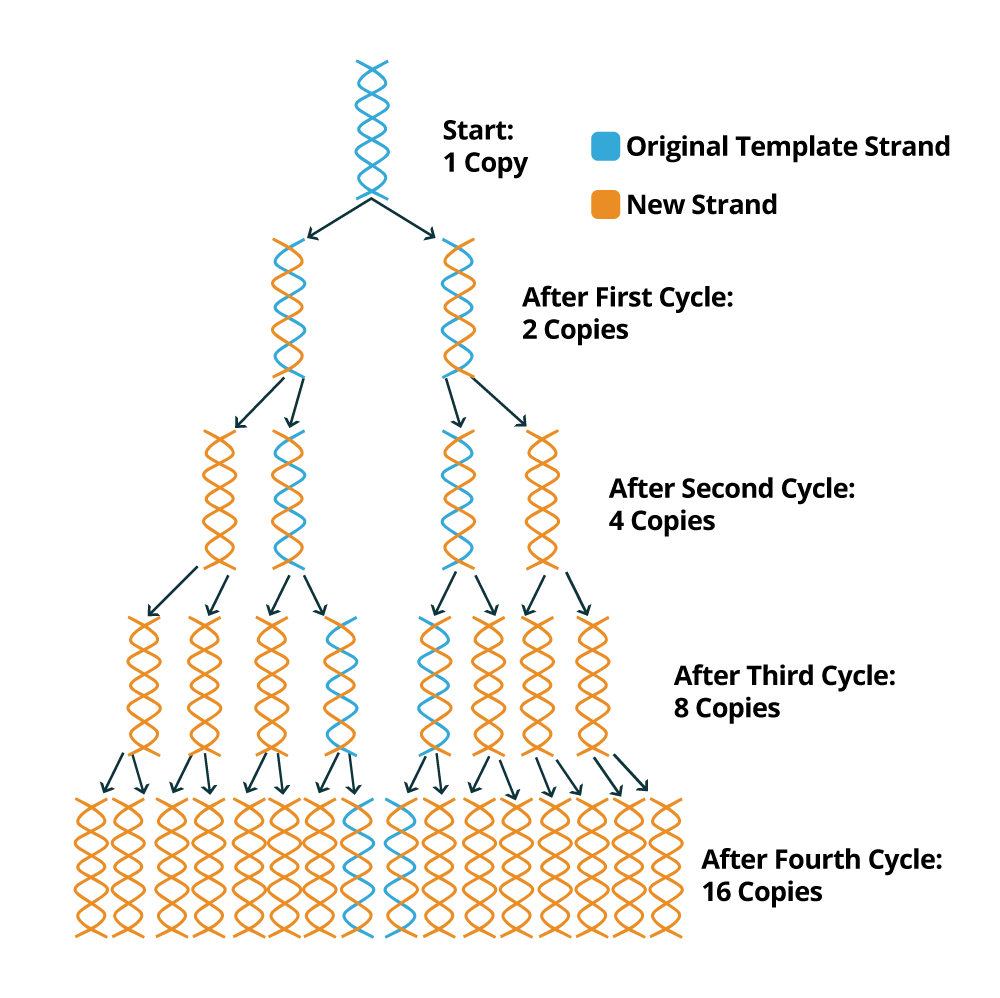 At the end of the PCR, the PCR product should be loaded into an agarose gel for electrophoresis. This will allow one to confirm the correct size of the amplicon, and if required, to purify it for further molecular experiments such as cloning. The PCR procedure can be useful for DNA cloning, DNA sequencing, phylogenetic studies, forensic analysis, and more!

Depending on the expected size of the amplified fragment, a fraction of your PCR reaction should be loaded onto a 0.8–3% agarose gel containing 1 μg ml–1 ethidium bromide. Typically, one tenth or one-fifth of the reaction volume is loaded and the remainder is stored at 4°C or –20°C for future use. An aliquot of loading dye containing glycerol and a marker such as bromophenol blue should be added to the sample to assist both loading on the agarose gel and visualization of the sample migration through the gel. After gel electrophoresis is complete, the gel is visualized using UV light and special equipment. Non-toxic dyes such as SYBR® green can also be used to visualize the results. The intensity of the band can be used to estimate the amount of product of a particular molecular weight (relative to a molecular ladder). Gel electrophoresis also shows the specificity of the reaction, because the presence of multiple bands indicates secondary amplification products. A photo can be taken for this gel data, and then the results may be explained according to this data. See the Sample Preparation and Protocols section (PCR Product Analysis: Gel Electrophoresis) for more protocol details.

The diagram below represents an example result of gel electrophoresis. 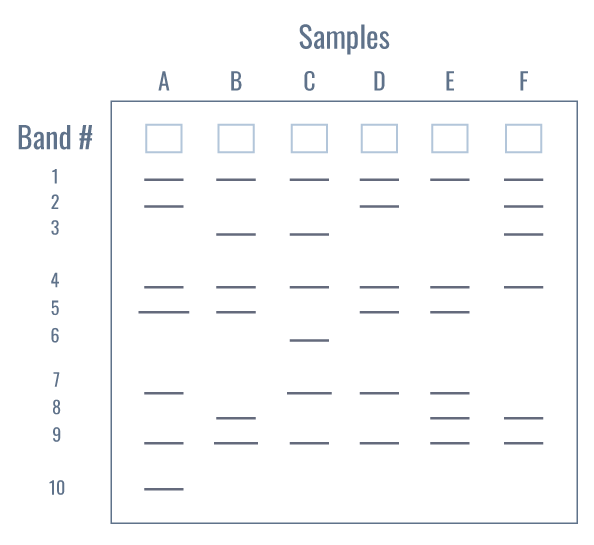 Each sample of A, B, C, D, E and F was loaded into a separate lane of the agarose gel. After eletrophoresis, each sample will be separated into a number of bands with each band representing a fragment of DNA. The larger sized fragments stay close to the top, while the smaller sized fragments travel to the bottom. The similarity and difference between sample or genotypes depends on the presence or absence of bands.

Advances in molecular biology allow us to diversify the applications for PCR procedure and the methods which molecular biologists study the genetic components of a cell. The reverse transcriptase enzyme is an enzyme that has a catalytic activity similar to DNA polymerase, but instead of DNA, it uses mRNA as the template to generate a DNA strand. This approach allows us to identify only genes that are being expressed in a specific cell at a specific time and environmental condition. After synthesis of complementary DNA or cDNA strand from the mRNA template by reverse transcriptase and using standard PCR protocols, it is possible to perform a qRT-PCR (quantitative real time PCR).

The qRT-PCR is based on the principle that higher or lower initial amounts of a specific DNA sequence will lead to higher or lower concentrations of amplicons respectively. Thus the PCR protocol will use a fluorescence dye to tag the newly synthesized sequences. Unlike a standard PCR, the qRT-PCR does not require purification and agarose gel analysis to analyze the amplicons. Since the amplicons are dyed, quantification of fluorescence will allow us to infer the amplicons concentrations. As an example, the SYBR green dye binds to dsDNA, but does not bind to single stranded DNA and RNA. When SYBR green dye is added to the PCR solution, it will radiate fluorescence only when it is bound to DNA, which uncovers the amplification of the DNA fragment flanked by the primers.

>>Did you know Boster has one-step kits for qRT-PCR? Save your time and reduce contamination with our convenient kits!

A set of procedures and data normalization is required before doing the quantification analysis:

In order to avoid variation in background signal caused by external factors not related to the samples (e.g. plasticware, light leaking, fluorescence probe not quenched, etc…), it is recommended to select the fluorescence intensity from the first cycles, usually cycles 5-15 and uncover a constant and linear component of background fluorescence. This information will then be used to define the baseline for analysis.

It is also important to select a quantification zone that is over the detection limit of the instrument used. Usually the number of cycles needed is directly proportional to the sample copy number. Instead of using the intensity of minimum fluorescence detected by the instrument, a quantification zone with higher fluorescence intensity is selected and a threshold defined for this area. Here are some guidelines to define a correct threshold:

Shown below is a reference diagram for threshold setting. 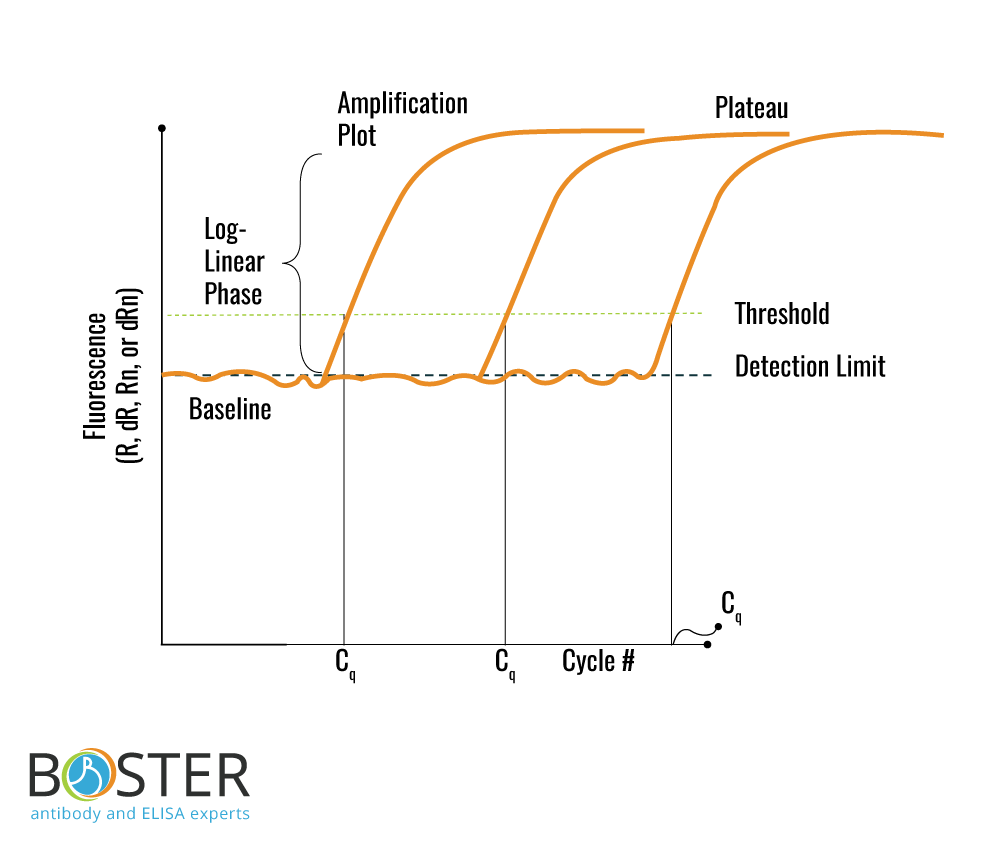 Usually relative quantification is used to make the data interpretation more intuitive and clear. Instead of plotting the Cq values for each sample, also denominated as absolute quantification, the Cq differences between samples are plotted, which allows us to access the expression fold changes for a specific targeted gene.